Following the leads of Bitcoin and Ethereum, XRP has stalled in the past 24 hours after a short push higher. The altcoin has flatlined around $0.285 over the past day, consolidating under the pivotal $0.30 resistance.

Despite the consolidation and the medium-term pullback from last week’s local highs, the asset’s on-chain and technical outlook remains strong according to analyses.

Despite falling 10% in the past week, XRP’s on-chain outlook remains somewhat bright. Blockchain analytics firm Santiment reported on August 24th that in spite of the price drop, the number of daily active addresses (a proxy count of daily active users) remains at a high level in a significant win for bulls:

“In spite of $XRP’s -9.2% retrace this past week, the active address output we’re seeing for the #3 market cap #crypto asset has remained high. #Ripple holders can take solace in it being one of the few #alts with a DAA bullish divergences we’ve identified.”

As the chart above suggests, XRP’s price action has actually somewhat followed the trajectory of the XRP Ledger’s on-chain data.

Related Reading: These 3 Trends Suggest Bitcoin Is Poised to Bounce After $1,000 Drop

The technicals paint a bright picture for the leading cryptocurrency as well according to pundits.

One trader noted that while he doesn’t think XRP has a long-term position in the crypto top 10, he thinks that liquidity could cause the asset to move higher in the nearer term:

It’s been a while since I looked at XRP. Easy to dismiss the stepchild. I think it finally finds its way pushed out of the top 10 during this macro cycle, but liquidity alone is enough to attract movement at some point. That’s always been its use-case anyways. Gonna set alarms. 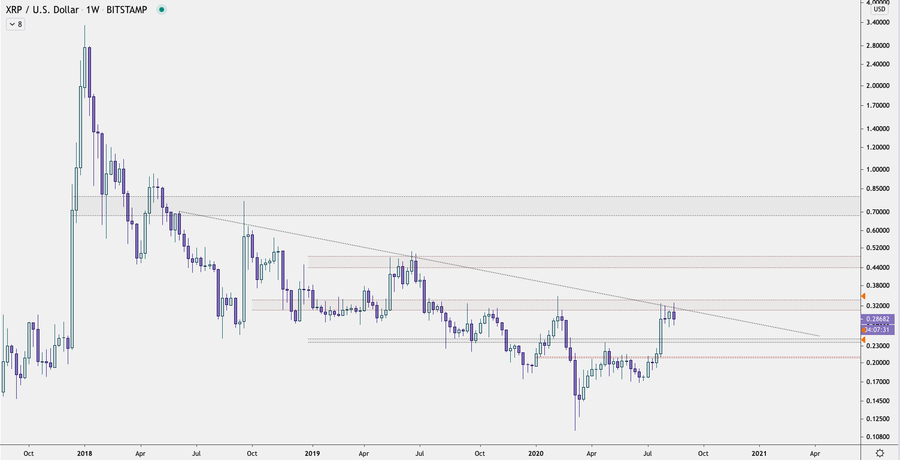 This optimism has been echoed by the head of technical analysis at Blockfyre, who wrote the following on the matter on XRP just recently:

“$XRP Still consolidating around this ever so important S/R that dates back 3 years. Ultimately expecting this to move up over the next few months at it’s own pace. Eyes on .475 in the coming weeks.”

This trader thinks that by year end, XRP could reach $1.00 as the technicals indicate the asset’s macro bear trend has ended.

Ripple (XRP) Rallies 20%, Why Dips Could Be Attractive

A Review of BTCGOSU — Reviewer of Crypto Casinos

ABOUT US
News Crypto Live promises to be a fair and objective portal, where readers can find the best information, recent crypto currency news.
FOLLOW US
© Newscryptolive.eu
0Shares
0 0